Diversification and the Flaws of Favoritism

Investment returns during 2014 diverged greatly, as any investor that diversified away from U.S. large cap stocks was left disappointed. While the S&P 500 returned almost 13.7%, the MSCI EAFE was negative at -4.5%. This means a global investor would have earned half of that of a pure U.S. investor.

Given the idea the U.S. economy has appeared to go in the opposite direction from many parts of the world, some are tempted to abandon a globally-diversified portfolio in favor of one that is concentrated in U.S. equities. In our opinion, this would be a mistake.

Over the past several years, we have continued to educate investors on the benefits of investing in international stocks despite relative underperformance against domestic stocks. While it may be difficult, it’s important to remain cautious and patient. This is why we continue to advocate a well-diversified global portfolio in which investors take action to rebalance away from expensive investments and into areas that have not done as well. 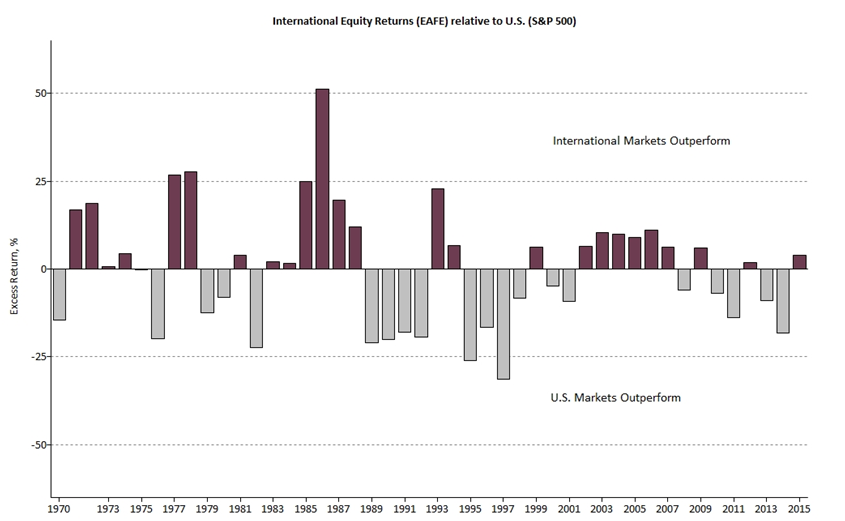 Investors forget that from 2003-2007 the S&P 500 trailed the MSCI EAFE by leaps and bounds. During that timeframe, the MSCI EAFE more than doubled the return of the S&P 500. By 2007, more and more investors wanted to overweight international stocks in their portfolios. In hindsight, this would have been a major mistake as international stocks gave up 43% in 2008 whereas U.S. stocks sank 37%. Over the next six years, the S&P returned 244% on a cumulative return basis, which includes the reinvestment of dividends. The table below illustrates this point.

In the end, we’ll never know when one area of the market will take the lead. Holding a diversified portfolio, though, allows us to not worry about things we cannot control – no matter how much it bothers us sometimes.